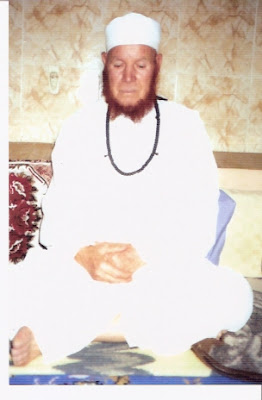 I returned in the early hours of this morning from the funeral, in Nador, of Sid Shaykh Buzidi Bujrafi of the Shadhili-Darqawi-Alawi tariqa. I will not attempt to give an exhaustive obituary here - that should be left to one of his murids, I feel - but I would like to try and describe some reflections on the Shaykh and his passing while they are still fresh in my mind.


Upon entering the zawiya in Nador, the first thing I was aware of was timelessness, the timelessness of the place. Though I had not been there in two years or so, it felt as though I had never left. Sidi Nabil, muqaddam of the Oujda zawiya, said the same to me later on that day. In the zawiya of Shaykh Buzidi, there was no time. It was not Monday, Tuesday, Spring, Summer, December, July; it was only dhikr Allah, remembrance of Him who is beyond time.

Yet of course there was one crucial difference this time around: the Shaykh himself was not there to greet us; and this leads me to the second noticeable presence in the zawiya that morning: grief. We were greeted by Sidi Abd al-Rahim, the Shaykh's son, whose face was an image of grief and loss such as I have never seen. It was all we could do to embrace him, and add our tears to his, without any words being needed. We had arrived just in time to offer the dawn prayer with the congregation. Sidi Abd al-Rahim beckoned to Shaykh Sa'id of Salé to lead the prayer, but the Shaykh took off his woollen cloak and threw it over the shoulders of Sidi Abd al-Rahim, and bade him lead it. After the prayer, we recited together the surat al-Waqi'a and other litanies, and then withdrew to recite our daily wird individually. In gatherings of years past, the fuqara would usually take the two hours or so after this to snatch some sleep after their journeys, and the zawiya would echo with the sound of deep breathing and gentle snores. On this day, though, there was only the sound of muffled sobs and cries.


At around half past seven, a breakfast of olives and olive oil was brought out. Usually at this time, Shaykh Buzidi would come out clapping his hands and singing the Testimony of Faith to rouse the sleeping fuqara for a day of worship; today it was his memory that roused them. After breakfast and ablutions, we began the dhikr, singing the poems of the great spiritual masters of the Order. Many of the lines sung were, of course, those composed by the Shaykh himself. People began to trickle in through the doors of the zawiya, coming from near and far, many of them sobbing, almost all of them weeping. Shaykh Sa'id gave a short talk, quoting lines that would be repeated by many throughout the day, from a poem of the Shaykh al-Alawi:


My beloved ones, if you truly follow me,
Then here is the path: walk upon it behind me.

The path of the Shaykh remains, he said, and it is for his disciples to follow it. He also said that the death of a saint is a time of rejoicing, for it is only then that he is given his true life in the realm of the spirit, free of the chains of this bodily life. He then announced that instead of praying the Friday prayer and funeral in the zawiya, as had first been planned, he had advised the fuqara to bear the Shaykh to the mosque for the prayer, and then return him to the zawiya for burial. This, he said, was so that the funeral prayer would be attended by all, those who knew the Shaykh and those who knew him not, and also so that the people could observe the funeral procession and pay their respects.


At around eleven o'clock, the Shaykh's bier was carried into the zawiya, covered in a green cloth on which verses of the Quran were embroidered. The outpourings of sadness intensified; I do not feel you can know what grief is until you have seen elderly men, normally so stoic and calm, weeping and wailing for a man they loved solely for the sake of Allah. A hadra began, the circle made around the Shaykh once more as it had been so many times in his life. All the Jalal of Allah seemed to be manifested in the room, and it was too much for some, who collapsed into grief-stricken heaps upon the floor, clinging to each other for solace. La ilaha illa Allah. Such love.


And it was love, more than anything else, more even than grief, which was the dominant presence in the zawiya on this day. The Shaykh's bier was taken up by his sons and loved ones, and carried through the streets some distance to the mosque; the procession took perhaps half an hour. Those several hundred men who walked behind it were connected by nothing but love: love for Allah, love for His Messenger (upon whom be blessings and peace), love for those who love Him. If someone were to ask me what love is, I would attempt no definition, but simply say: Go to the zawiya of Sidi Shaykh Buzidi. If you cannot find it there, it cannot be found. The teachings of the Shaykh were simple: dhikr and mahabba. To describe his state would not take many words. What did he do? He invoked Allah. What did he embody? He embodied love for Allah and His Messenger (upon whom be blessings and peace). That is all. His poems of praise for the Prophet (upon whom be blessings and peace) were marked by a love that was pure and sincere, with no artifice or pretension. It was these poems that the fuqara sang as they bore the Shaykh back to the zawiya after the prayer, as tradesmen and their customers stood at the doors of their businesses and bowed their heads in respect. The Shaykh was interred in his zawiya as the mourners recited the Ya Sin, al-Mulk, al-Ikhlas. A few people spoke as best they could, choked by their grief; and Sidi Abd al-Rahim, who now finds the zawiya under his care, was asked to speak, but could not quell his tears long enough to utter even a word. The Shaykh was in any case not a fan of words, preferring the dhikr Allah and the poems of the righteous to fill his zawiya with sound and life; and the fuqara then set about doing just that. They are doing it still as I write this, and will continue to do it thereafter. In the zawiya of Sidi Shaykh Buzidi, after all, there is no time.

Jazak Allahu kheiran for such an eloquent and poignant account, Novid

Sidi Khalid, Thank you so much for sharing your heartfelt grief and moving account of the passing away and funeral of a great luminary and pole of our time. As a member of ISRA, a movement of promoting the love of Allah Sunhanahu wa Ta'allah and His Messenger Muhammad Sallal-lahu 'Alayhee Wa Sallam and reviving the lost pillar of Deen, Al-Ihsaan, We would humbly request you to provide us with the details of his departure from the worldly life to the heavenly abode. We would like to share it with our readers worldwide on our website at www.IsraInternational.com The members of ISRA share the in the grief of the family, friends and students of Shaykh Buzidi. We ask Allah (swt) to grant him a place closer to Him in His abode of Mercy.

Thank you for your kind words. The Shaykh passed away on the 29th of December in Melilla near his home of Nador, Morocco, after a long illness which suddenly worsened. May Allah sanctify his secret.

Sidi Khalid please know that articles covering the life and passing of Shaykh Buzidi are published on ISRA organization's website. Readers may go to www.IsraInternational.com to read it. Most of the material is reproduced from the eariler articles of Murid's Log. The coverage includes funeral pictures and a rare video of Shaykh Buzidi Rahmatullahi Alayhee. Members of ISRA appreciate the valuable services rendered by you in reviving the spiritual essence of Islam. Was-salaam,
Sayed Sajid

Jazak allah kol khair for this account, I was greatly moved by it.
Nora.

salam alaikum wa rahmatullah sidi khalid william, allah bless our shaikh in dunya and in akhira, he was a manifastation of the hadra, allah keep his secret!. sidi im mohammad dominguez, in the past year i was recive the idn to build a zawiyah in venezuela and to transmit the silsilah from our shaikh al buzidi al ma'aruf in zeganga, he speak to me veri well about another muqaddam in england, i want to contact with him... are you that muqaddam?? my email sin megaboy84@hotmail.com pleas contact me if you are that muqaddam, i will travel pximily to zeganga insha allah wiath a brother of venezuela that live in spain, mybe we can meet there, thanks for all and pleas excuseme for my poor english, as salamu alaikum wa rahmatullah wa barakatuhu. allah is our guide and we are not.