I was once with one of the brethren, Sidi Ahmed at-Tahir, in the Qarawiyyin. We were both in a strong state of witnessing in those times, but that day I found he had withered, or should we say ‘weakened’, until he had started to fall into idle prattle like anyone else. I scolded him violently, saying: 'If you wish to succeed, then strike your ego and throw it aside.'

I also said to one of the brethren, who had told me that one day he had lashed out at a Jewish man, not for any reason but his own vain-glory, and maliciousness: 'Do not strike anyone, be he Jew, Christian, or Muslim, but rather strike out at your own ego, and continue to do so until it dies.’ This is of the up most importance.

We believe, and God knows best, that he who has lost sight of the people has not truly witnessed God in all His glory. The one who is complete is he who is not veiled from the creation by his Creator, or from the Creator by His creation in all its shapes and forms. This is the one who has arrived and is complete. This is the Gnostic; and the opposite of this is the one who is lost and confused; except for the one who has lost his mind out of love for God (al-Majdhūb), for he no longer has the faculty to perceive things, and is therefore not lost and confused. Peace.

Posted by Khalid Williams at 4:15 PM No comments:

Occupy yourselves with that which your Lord has called you to do. Do not be concerned with those who harm you, whether they be from amongst you or from outside. If you do not seek to stand up for yourselves then God all-Mighty will do so for you and subsequently take over your affair, and if you stand up for yourselves then He will leave the affair in your hands and you will be left helpless, and God has power over everything.

(Sidi Qasim al-Khassasi:) ‘Don't ever be concerned with those who come to harm you. Instead, occupy yourself with God, and He will turn them away. He is the one who brought them to you in order to test whether you were being truthful in your claim. How many a man has slipped up on this point, and become concerned with defending himself against those who harmed him, therefore causing the harm to persist and falling into sin at the same time. If only he turned to his Lord He would turn them away from him, and suffice him.’ Peace.

Posted by Khalid Williams at 4:13 PM No comments:

Concern yourself with that which kills your ego and brings life to your heart. The source of all things righteous is in emptying the heart of love for worldly things; and the source of all things putrid is in filling your heart with love for those things. I wrote to some of the brethren concerning those things that bring about immorality and deviancy, and all of it stems from the love of this material world. Whoever turns towards it with his heart and limbs is the most deviant of people and the worst of oppressors. Were it not for the faith in his heart we would have labelled him a disbeliever, so stick to that which kills your ego and brings life to your hearts as we have said. There is no way to God until we have killed out egos, no matter what knowledge we might have accumulated.

Abu Madyan: ‘Whoever has not killed his ego has not witnessed God.’

One of the brethren complained to us about someone who had oppressed him harshly. We said to him: ‘If you wish to kill he who oppresses you, kill your own ego. By killing it you wipe out all oppressors, and God’s curse is upon those who lie.’

Woe to him who sees his own ego in front of him and does not efface it. One does this by making it bear what is heavy for it, until it is finally slain.

Love is a bride and her dowry is ones ego, so slay it, and your heart will come alive. Once you do so you will be free of fault, and will witness the unseen world. Whoever reaches this station is amongst the best of creation.

Always be in a state of purity, humbleness and contentment as long as you live. No one is truly impoverished until they have killed their ego and known their Lord. Accumulation for the sake of God brings you towards God and accumulation for other than God’s sake takes you further away from Him, and we seek God’s refuge. In truth there is nothing but God alone. He was, and nothing else was; and He is now as He was. Peace.

Posted by Khalid Williams at 4:12 PM No comments:

Praise God that He has directed you to Him in a time when so many hearts have been snatched away by worldly things. Not being tied up in worldly affairs is a high station that holds a secret well known to those whose hearts are illuminated. God does not forsake he who has fled the means, and rejected wearing fine clothes and seeking solace in sitting with loved ones and friends. One must try to emulate the people who came before. Whoever wants to be truly adorned, let him strip himself of his own desires. Because many of those from the east and the west fled from the means, they were remembered after their time. Peace

Idris
Posted by Khalid Williams at 4:10 PM No comments:

You cannot get to God until you efface your own self. You cannot do so unless you see the image of your ego in front of you. You cannot do this unless you rid yourself of this world, companions, loved ones and everything you are accustomed to.

Do not astound the people with your ability to perform miracles; rather, busy yourself with that which destroys the ego and brings life to the heart. I was shocked and disturbed when I heard that they were exposing the secrets of the path to the people. If they do so, their inner light will turn to darkness. Peace

Posted by Khalid Williams at 4:04 PM No comments:

Whoever wishes to be close to his Lord, and be granted a special place beside Him, then let him take only what is necessary from this world, that which can be obtained without hardship and toil. Do not be deceived by the knowledge of those who are in love with this world, nor by their works, no matter what the case; they are ignorant, and bereft of knowledge. The scholar who follows the Sunnah is the one who detests this world and takes only that which is sufficient for him.

This is the way of our Prophet, may God bless him and grant him peace. Whoever's heart is absorbed with the love of this world, and his limbs with accumulating from it, has no knowledge, and no works.

'God does not look to your images, nor to your bodies; rather, He looks to your hearts.'

Posted by Khalid Williams at 3:58 PM No comments:

The ego is a wondrous thing, for it is the creation complete. It is a copy of it, and everything found in the creation can be found therein, and vice-versa. Whoever takes hold of it will doubtless take hold of creation itself; and whoever lets it take hold of him will be taken hold of by the whole of creation.

Once there was no harvest in the region of Tafillelt, so when they went to perform the rites of pilgrimage, they decided to search for someone related to the Prophet, may God bless him and grant him peace, to ask him to grant them one of his children. When they found him, he agreed to do so. He called one of his sons to come and join them and asked him: 'If someone is good to you, how do you respond?' The son said: 'I would be good to him as he was to me.' Then, he asked him: 'What about if someone treated you badly?' The son replied: 'We treat him just as he treated us.' The father told him he could go. Then he called his sons one after the other and they responded with the same answer until they came to his youngest. When he was asked the second question he replied: 'We treat him well.' The father inquired: 'How is it you treat him well after he has been bad to you?' The boy responded: 'He is as he is, and I am as I am, until my good treatment of him gets the better of him.' The father gave his son over to the men and prayed for them all. Out of their love for the boy their crops yielded produce from then on.

The moral of the story is to love the Prophet, may God bless him and grant him peace, because his love will rectify anything. Be good to whoever treats you badly, until you overcome him. This is honour and this is high moral character. God produced from his descent many a scholar and righteous man who were the like of the Companions themselves.

Posted by Khalid Williams at 3:55 PM No comments: 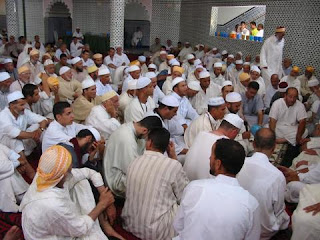 Here's a Hadra from the annual gathering of the Alawi Tariqa in Melilla, Morocco, July 2007, in the presence of our Shaykh, Sidi al-Buzidi. (The photo is actually from a couple of years ago)