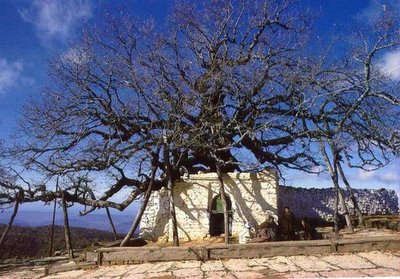 In the sixth century after the Hijra of the Beloved Prophet of Allah, may Allah bless him and give him peace, a boy was born to a noble family of the mountain tribe of Bani ‘Urus, who lived in the region of Ghimara of the north of Morocco. The tribe was known to be comprised of many families of Shurafa, descendants of the Prophet, may Allah bless him and give him peace, and of many who had memorised the book of Allah in its entirety.


The day the boy was born, many thousands of miles away in Iraq, a bodiless voice called out to the Wali Allah Sheikh ‘Abd al-Qadir al-Jilani, whose feet were on the necks of the Awliya because of his high station with Allah. The voice said:

O Abd al-Qadir! Raise your foot from the people of the West, for the Qutb of Morocco has been born this day!

Abd al-Qadir set off walking, and did not cease until he had entered Morocco and climbed to the peak of the mountain of Jabal ‘Alam, where the lad’s family resided. The Friends of Allah may be blessed by Him with the ability to traverse such distances in mere moments. He went to the father of the lad, and requested that he bring his son out to meet him. The man duly obliged, and brought out his eldest son. Abd al-Qadir insisted it was the wrong son, and that he should present any others he might have. Before long, all of the fellow’s sons stood before Abd al-Qadir, all save the newborn. The man said informed Abd al-Qadir that he had no other sons, save for a boy who was born only that day. ‘Bring him out’ was the reply, ‘for he is the one I wish to meet.’ The boy was brought out, and the Wali took him, and placed his hands upon him, and beseeched Allah for him.

This boy was Moulay Abd as-Salam ibn Mashish, the Knower of Allah, the Sheikh of the Sufis, the Father of the Shadhili Tariqa. Descended from the Prophet, may Allah bless him and give him peace, through the Father of Muslim Morocco Moulay Idris, and marked out so early in his life by one of the greatest of the Friends of Allah so early in his life, it is hardly surprising that the boy was like no other. He shared a karama in common with Sheikh al-Jilani, in that when the crescent moon of Ramadan appeared in the sky at the month’s first, he was firm in refusing his mother’s breast in daylight hours, waiting for the call to prayer at sunset so that he could feed; and so he would continue until the day of Eid.

Moulay Abd as-Salam’s upbringing was similar to that of the others boys of his tribe: he was educated in the traditional manner, and proved an exceptional student. By the age of twelve, he had memorised the Book of Allah according to its seven variant readings. He studied under many teachers, among them the great faqih Sidi al-Hajj Ahmad Aqtran, with whom he studied the outer sciences of the religion, including the Mudawwana of Imam Malik.

He took the Way of the Sufis from his spiritual guide, Sidi Abd ar-Rahman ibn Hasan as-Sharif al-‘Attar al-Madani az-Ziyyat,


Many tales are recorded in the books of the Sufis concerning the status of the Sheikh, and his wisdom. His great pupil, Abu al-Hasan as-Shadhili, recalled the moment when he first encountered the Sheikh:

At the beginning of my affair, I was travelling in search of Allah when I arrived at a state of indecision. Should I withdraw from the world and give myself over to the continuous worship of Allah, or should I return to the city, to seek the company of the scholars and the righteous? News came to me of a Wali who lived on the summit of a nearby mountain, and so I climbed up to seek him out. By the time I had reached the peak, night had fallen, and I said to myself: do not enter upon him at this late time. I became aware of a voice coming from the hollow, calling out: ‘O Allah! Verily, a people have asked of You that You make easy for them Your creation, and in deed You subdued it for them, and they were delighted by that. O Allah, I ask you for the scorn of Your creation, so that I may have no refuge except with You.’
I said to myself: Behold, the depths this Sheikh has traversed!

The next morning, I entered upon him, shivering out of awe before him. I said to him “Sidi, how do you do?” he replied:
“I complain to Allah of the chill of contentment and submission, just as you complain to Allah of the heat of being trapped in planning and free will.” I said to him: “As for me complaining of the overwhelming heat of planning and free will, I have tasted it and know it well. But your complaint of the chill of contentment and submission? What is this?” He replied: “I fear that their sweetness might distract me from Allah Himself.” I asked him about the prayer I had overheard. He smiled, and said: “O my son! Replace these words of yours ‘subdue for me Your creation’, and say instead: ‘O My Lord, be for me!’ do you think that if Allah was for you, you would want for anything? What an enormity that would be!”

One day, Abu al-Hasan was with Sheikh ibn Mashish, and thought silently to himself, ‘I wonder if he knows the Greatest Name of Allah?’ He heard the voice of the Sheikh’s son – and he was not present with us at the time – say: ‘O Abu al-Hasan! The point is not that you know the Name, the point is that you be the essence of the Name itself!’ The Sheikh looked to Abu al-Hasan and said: ‘My son has read you well, and hit the mark!’

As for the meaning of his words, it is that he who is one with the essence of the Name is the one who has realised the state of fana’ – annihilation in Allah, so that he sees nothing, nor hears nothing, in all of being except He.

Moulay Abd as-Salam said to Abu al-Hasan one day: ‘Beware of people! Purify your tongue from mentioning them, and your heart from acting to please them! Guard your extremities and perform your obligations, and you will attain the Wilaya of Allah. Never mention them, except when the right of Allah upon you demands it, and your piety will be complete. Say: O Allah, preserve me from mentioning them, and from the obstacles they present, and save me from the evil of them, and suffice me with Your goodness over theirs, and distinguish me from among them, indeed You are capable of all things!”

When a righteous servant of Allah asks his Lord to distinguish him from amongst the people, he is not asking for palaces, wealth, or fame. Rather, he asks for the opposite; for utter freedom from the needs of this world. When the righteous slave of Allah seeks refuge with Him from the people, and their mention, he does not do so out of hatred for them, nor disdain for them, nor arrogance. He does not feel himself to be better than them, and so seek refuge from their evil. Rather, he seeks from Allah to place him in such a state that his heart is free of need for anything of the creation, and to rid his ego from the need to constantly please people and have a good reputation amongst them, even at the expense of seeking the pleasure of Allah. The Friend of Allah does not hate people, nor does he harbour ill will toward them; indeed, he does not see them at all. When a lover beholds his beloved, if the whole of the world and its delights were to be paraded before him, his gaze would not fall upon it even for the blinking of an eye. Such is it with the those who love Allah.

Moulay Abd as-Salam ibn Mashish died in the year 622 after the Hijra. His death came at the hands of a magician by the name of Abu Tawajin, who claimed prophethood. This creature had at his command a group of the jinn, who one day were late coming to his service. When he demanded from them an explanation, they told him they had scaled a mountain where a man spent his time in worship, and when they had approached him, the intense light coming from him had caused them to burst into flames. Upon hearing this news, the false prophet became enraged with jealousy and sent a group of his henchmen to assassinate him. They met the Sheikh at dawn as he was preparing to pray, and fell upon him. As soon as they had martyred the Sheikh, a thick fog descended upon them, forcing them into a chasm in the mountain, from which none of them escaped to tell the tale.

As for Abu Tawajin, the army of the Muwahhidoun in Sebta heard of his treachery, and set out to rid the country of his scourge once and for all. Before long, Moulay Abd as-Salam had been avenged, and the false prophet lay slain. His body was tarnished and buried, and to this day remains a place of loathing. It is said that anyone who walks by it immediately is beset by an intense call of nature, and the grave presents the only suitable place to answer this call. Such is the reward of he who kills a Friend of Allah, and harms the pure family of the Messenger of Allah, may Allah bless him and give him peace.

And so the Sheikh died, martyred in the Way of Allah, preserved in his grave alive until the Day of Resurrection. He died, after giving the world from amongst his students the three Qutbs: Sidi Ibrahim ad-Dusuqi, Sidi Ahmad al-Badawi, and Sidi Abu al-Hasan as-Shadhili. May Allah be pleased with all of them, and all those who follow their path. Moulay abd as-Salam was buried at his place of worship atop the mountain of Jabal ‘Alam, and a small tomb was built above him. A tree now grows from his tomb, spreading its branches high above the many visitors who have sought the grave out to visit one of the greatest of the Friends of Allah. Its many branches twist and extend far out from its roots, just as the many men and women who took the Way of Allah from his students have spread, throughout every corner of the world. They are all of them nourished by the Light that Allah gave to him, that even now flows through the veins of his successors. From the humble roots, a mighty oak has risen.

The Shadhili Tariqa is built on the foundations of Shukr and Mahabba: gratitude to Allah, and love for Him. Moulay Abd as-Salam ibn Mashish summed up the way of the Tariqa that his greatest student was to found in his famous advice to the brethren:

Love for Allah,
Satisfaction with the Decree of Allah,
Indifference of the heart towards worldly things, and
Reliance on Allah.

Were this admonition the only piece of knowledge we had of the Sheikh, it would be enough to prove the truth of his immense understanding, and his lofty status before Allah.

May Allah be pleased with him, and with all those who yearn to find what he found. And may the peace and blessing of Allah be upon his grandfather, the Noble Prophet Muhammad, and on all those who follow his Sunnah until the End of Days.

Khalid
Posted by Khalid Williams at 11:05 AM 23 comments: